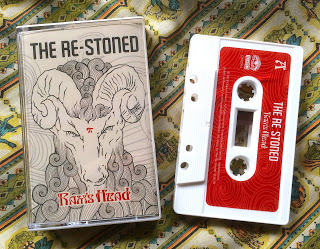 Moscow’s The Re-Stoned play heady riffs like a stoner-rock/psychy jam band…or are they more of a jammy, stoner/psych band? There’s a fine line here, and they hop-scotch it mercilessly, fluidly showcasing their ability to flit between loosey-goosey, cosmic airiness, marsh-moshy swing-stompage, and lock-step-thrashy, headbangable anthems. &Further reaching for Valhalla, they sprinkle in some sweet, creative pedal-work, slide guitar, and long-form riffage that must make them a MUST SEE LIVE outfit!

Judging by their bandcamp output, The Re-Stoned have been around for over a decade, but this new album is easily their most dynamic and explorative, in terms of weight and groove. Check out a few of their earlier releases and compare them to this one to see if you're as excited as I am about their impending trajectory, hopefully to be mapped out on their* (?) label-in-the-works, Qiasum.

*totally inferring/bullshitting here, but I’m pretty sure Qiasum will be releasing their next few gravity-rich releases, out of Moscow