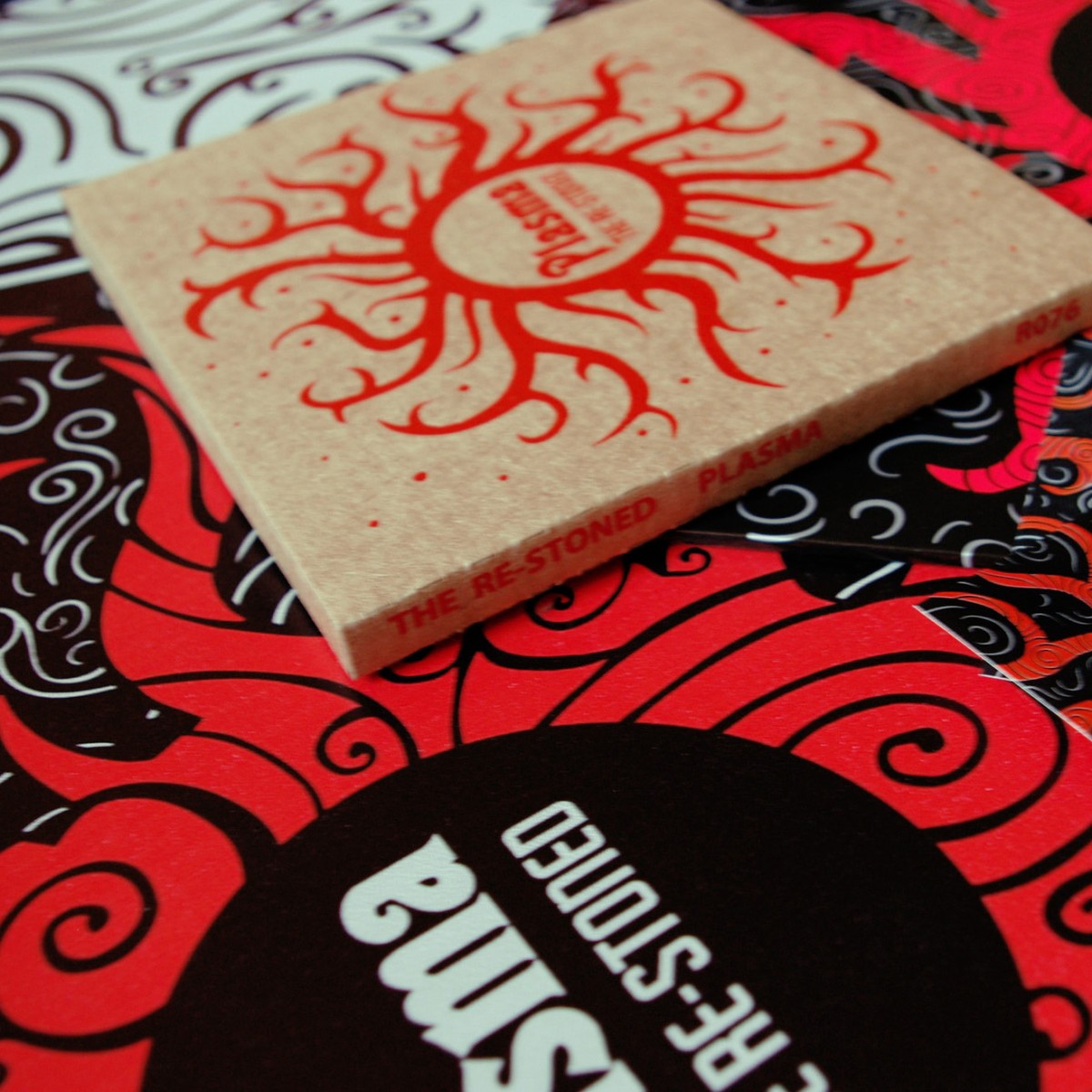 Moscow-based heavy psych outfit The Re-Stoned have sandwiched the bulk of the material on their new album between two massive 11-minute tracks, opener “Faces of Earth” and closer “Alpha Rhythm,” but that’s really just the beginning of the story when it comes to how Plasma is put together. The instrumental band led by and mostly comprised of guitarist/bassist Ilya Lipkin released their last record, Analog (review here), through R.A.I.G. in 2010, and Plasma sees issue through the same label as well, but instead of a jewel case arrives bundled in a folded cardboard box — almost like a miniaturized vinyl mailer with the logo printed on the front and the album info on back. It may not prove the most durable packaging option when it comes to standing the test of time, but it certainly is creative.

Lipkin, who is joined by drummers Vasily Bartov, Pavel Voloshin and Evgeny Tkachev throughout Plasma‘s eight tracks/58 minutes, employs a host of effects on his guitar and bass to add flourish to the tradicionnyj stoner riffing that lies at the heart of the band’s sound, and while the cardboard packaging doesn’t seem to have any direct correlation to what’s happening musically or thematically with the album or its titles — though one does unfold the package and the flow of the album unfolds as well — it does grab the attention as only intricate physical media can. I’ve never thought of cardboard as particularly groovy, but maybe that’s what Lipkin is going for. I couldn’t really say.

The album boasts two covers — an extended jam on Jefferson Airplane’s “Today” in the first half and one on Pink Floyd‘s “Julia Dream” in the second — and with guest vocals from Veronika Martynova, they stand out in the tracklisting immediately and wind up as some of the record’s strongest material, incorporating elements of psychedelic folk with Lipkin layering acoustic and electric guitar. Elsewhere, the standout soloing of “Moon Dust” seems to be surfing with Joe Satriani‘s alien, while the riffs on the earlier “Grease” remind of some of the Karma to Burn-isms that showed up last time around. Fittingly titled, “Acoustic” is no less rich than any of the other material, given depth by Arkady Fedotov‘s synth and Tkachev‘s percussion, and as it occurs directly toward the middle of the album, it too seems to fall in line as another well-placed element at work to the benefit of Plasma.

Really, rather than be fed into by the music as part of an overarching theme, the uncommon packaging option for Plasma serves as an example of how intricately the record as a whole is constructed, be it the space-rocking jam of “The Clay God” or the more open, airy musicality of “Alpha Rhythm,” slowly developing over the calming course of its 11:26. The Re-Stoned and in particular Lipkin as the driving force behind the band impress on all fronts, and if it’s the package housing the CD that gets you to notice the album first, it’s one more thing to be thankful for after you’ve heard it later.

I’ve spouted off plenty of times about what a difference physical media can make in giving someone an impression of a work, so I’ll spare it, but in a case like this, the artwork — Lipkin also designed the logo — and the presentation to the audience becomes a part of the experience, and every time I reach for Plasma, it will be a different feeling than anything else that might be situated on that shelf, including Analog. If the record wasn’t up to par as a listen, it would be gimmicky, but The Re-Stoned have even more tools with which to satisfy sonically than they do in terms of the aesthetic in their choice of casing, so in addition to being a nice package, Plasma is also a complete one.