Ilya, on 20 May the new The Re-Stoned album «Stories of The Astral Lizard Vol.2» was released and apparently this one is something unusual, not in the vein of the classic The Re-Stoned sound. Please, tell me more.

You know, I’m a big fan of classic hard rock and blues. I was brought up on this music as well as 80’s and 90’s metal a bit later. After classic rock I discovered folk and classical music as well as many other genres. However the framework on a single musical genre has always been too limiting for me. I’ve always wanted to take anything I like from different music styles and “Stories of The Astral Lizard” was just one more evidence to that. Perhaps it all started far before the idea of creating The Re-Stoned came to my mind. In 2006 during the recording sessions of the folk project Waldsonne I met a brilliant percussionist Evgeniy Tkachev (who was the drummer for the bands Biosites and Yat-Kha). Later we established together an ethno-fusion project Rushus which despite being pretty short-lived one, in fact was a very interesting creative laboratory for me. Some ideas born in that period I’ve used in The Re-Stoned and my side-project Maat Lander later. 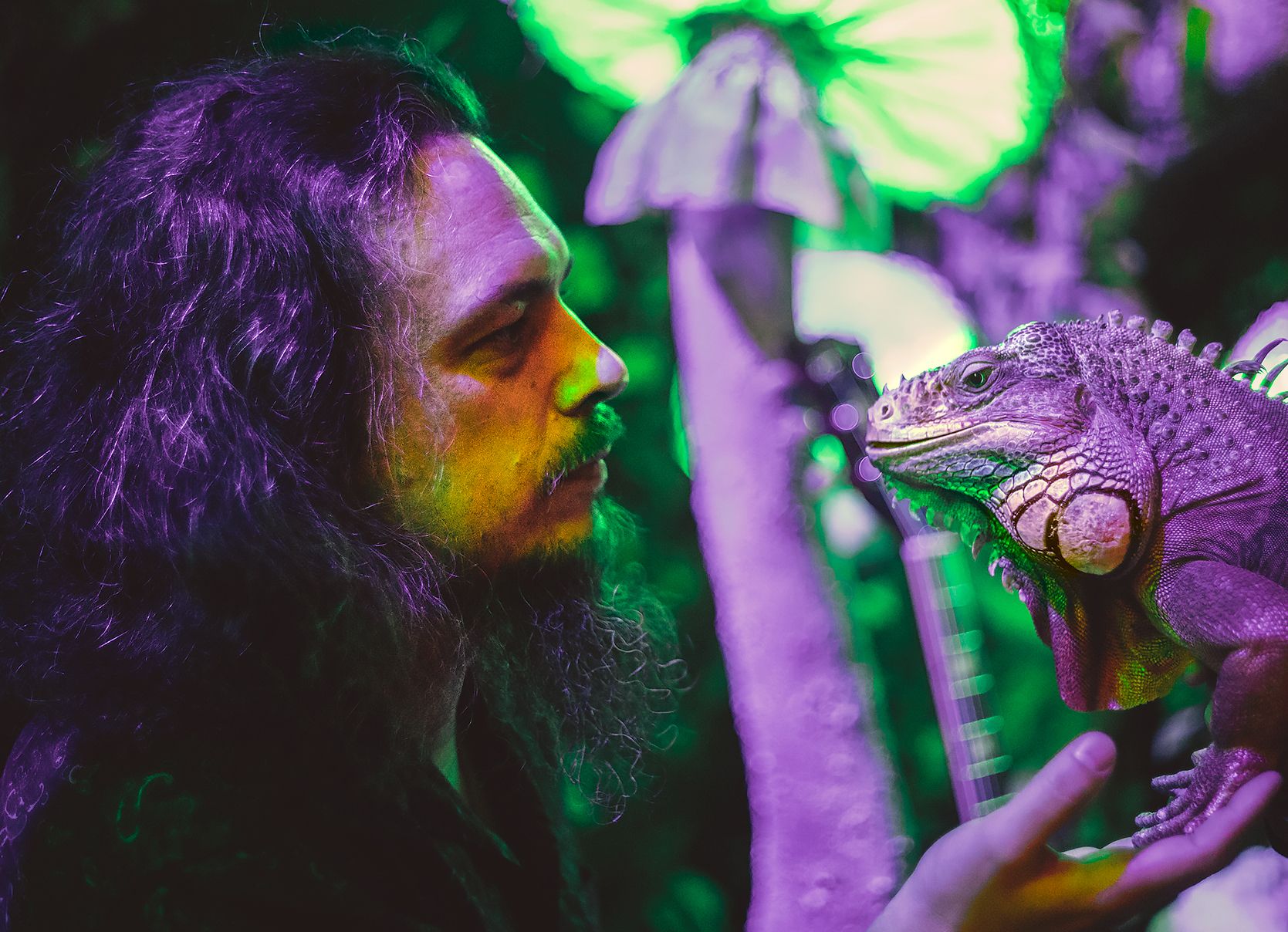 I’m curious what ideas, stories, emotions perhaps stimulated you to write this album? Will it be a logical sequel to «Stories of The Astral Lizard Vol.1» or it has nothing to do with that?

In 2018 together with Evgeniy Tkachev we recorded «Stories of The Astral Lizard» and that was a pretty adventurous step for a rock band (at least many people considered that so) to record an album with no drums at all. I’m really happy that our work has been duly appreciated as well as surprisingly broadened our audience. Of course I didn’t have any plans to do a possible sequel to this album, but after years passed once we have realised that time has come to do so! In the first “COVID” year, before the recording of the «Thunders of The Deep» album, in my home studio in several days we recorded many hours of electro-acoustic and plain acoustic sessions with Evgeniy Tkachev. Some bass parts I recorded myself, some were recorded by our magnificent bass player Vladimir Kislyakov, who has been a member of the band since 2017. On «Stories of The Astral Lizard» Vol. 2 I continued my musical experiments trying to enrich our sound palette with new composition structures and effects. In this connection it’s worth mentioning our close cooperation with Mark Ahlfs of Skreddy Pedals company as well as a bit “strange” instruments, at least in the context of The Re-Stoned, such as flute and clarinet played by a brilliant musician Alexander Dobromyslov. It seems to me hat the main difference between Vol. 1 and Vol. 2 is that Vol. 1 was 90% improvisation, but Vol. 2 was more “composed” pieces, but not excluding improvisation parts as well. We just gathered together playing, trying to “catch the wave”. Perhaps this was a sort of a sequel to Vol.1 but we really tried not to get fixated on how our old material sounded like. Trying to replicate my own long improvisation pieces later in order to record some additional parts to them was not the easiest task at all for it was a pretty time consuming but very interesting process. By the way long time ago I’ve noted that spontaneous pieces created the “non-linear” effect in music which makes one comprehend it completely different way comparing to that of the “well-calibrated” musical structures. People who have been listening to us for a long time know that The Re-Stoned have never produced self-repeating material. It seems to me that «Stories Of The Astral Lizard Vol.2» is going to become a sort of a turning point of the band. This, by all means, doesn’t mean that you won’t hear fuzz based riffs and rock drums, so no need to worry here!

Wow! Clarinet and flute! It seems to me unexpected to say the least. Are you planning to add more instruments of such kind to your sound arsenal?

Actually we have used a flute already on the “Stories of the Astral Lizard Vol.1” album, but clarinet was something new, agreed. I think we are ready to further broaden the palette of the guest instruments, but I don’t know yet what exactly they will be. Theremin perhaps?

I’ve always had a lot of respect for the musicians who are not afraid to experiment, to take a step aside so to say. I think this adds to their professional growth and band’s evolution as well. At the same tome, aren’t you afraid your fans won’t get it?

To tell the truth I had some worries of that kind releasing «Stories of The Astral Lizard Vol.1», but they are all in the past now. I know for sure there are many people out there waiting for our new release, specifically acoustic-wise, and this is amazing!

Are there any plans to perform your new album live off it will remain as a studio work only?

This is a relevant question. We don’t play many jam session of «Stories of The Astral Lizard Vol.1» live simply because for that we need several guitar players at once and this seems to be really complicated task. I did my arrangements without thinking them would ever be played on our gigs. Thing are a bit less complicated with the Vol.2, there are pieces there which we can perform live and I’m looking forward to including them into our future live set.

Can you remember any interesting stories in regard with the release of the Vol.1? How the audience reacted to the new, not familiar sound of the band?

I remember people writing me something like that - “I put the album on, first piece was a calm one, listening further the second one appeared as calm as the first one. So I thought - they would deliver some rock stuff as usual soon, but that never happened. So the album gained absolutely different comprehension angle, completely calm album of the “heavy” band, just wow!” That was a bit of a surprise for me as soon as nobody went like “hey guys, where were your signature riffs? how about playing some rock stuff?” After Vol.1 we released “Ram’s Head” with more traditional material and sound, many people liked it, but “Stories of The Astral Lizard Vol.1” still remains a special album for the fans of the band.

You are versatile enough as a musician, one can think of your projects Rushus and Maat Lander. Do you have any ideas for a new project of a split with musicians who are of the different vein than The Re-Stoned?

You forgot to mention A Foggy Realm project of mine. I’ve made a promise to myself a while ago not to do many side-projects in order to focus more on The Re-Stoned, but Maat Lander has made it anyway and I’m glad it happened. There is one more project, improvisation mostly, called Titanophone with The Re-Stoned bassist Vladimir Kislyakov and a great keyboard player Alexander Sokolov. We perform live sometimes and each concert is a sort of a stream of consciousness with no rehearsals, so we never know where we could find ourselves while improvising.

As far as I know you had plans apart from the album to release a single in some kind of a new digital format. Please, tell me more about it, I’m sure your fans will be interested.

The album is released in digital, CD and color vinyl formats. As for the single which has been already available on most digital platforms, there is an alternative mix in binaural format using the L-ISA, a technology of object-oriented audio mixing created by L-Acoustics company. This technology helps widening the stereo base of the track when a listener founds himself in the very center of the music canvas with a breathtaking level of detaling and dimension range. It’s worth mentioning that we became the first band from Russia who made a mix with the help of this unique technology.

Can you describe the show of your dream which you want to perform? What location, environment and atmosphere criteria have to be fulfilled to make his event the most memorable in your life?

You now, we had enough memorable concerts such as in the Cyprus desert or in the snowy mountains of the resort in France, but what I really dream of is to perform at Montreux Jazz Festival and amazing Duna Jam as well. This could be a kind of a landmark for me and I really hope this will happen one day.

In 2022 we have much better rhythm section, but without The Re-Stoned of 2010 there won’t be The Re-Stoned of 2022 and I’m thankful to cosmos for all the lineups we had. This is our way, not an easy one but vitally important. As for 2030 I think there will be more grey hair in my beard, but I’m sure it will be another very cool lineup consisting of like-minded musicians. I have plenty of new ideas music and sound-wise. The Re-Stoned is a part of me and has been my best musical brainchild ever. I’ll be happy to continue with it as soon as I have anything more to say in music. The fact that my efforts are appreciated by many people really means a lot to me, I love and highly value everyone who by various means supports me.

Thanks a lot for your questions, take care and stay safe in this difficult time. I hope the new stories of the Astral Lizard will be able to help you in that.