Did you come from a musical family?

I.L.: No, as far as I know we had no musicians in our family. My paternal grandfather was a surgeon, but he loved music, especially opera. He had a good ear for music and had wonderful musical memory, could whistle almost whole musical compositions.

What music were you exposed to growing up, either at home or with your friends?

I.L.: I liked to listen to vinyl discs in my childhood. Those were the songs from Soviet cartoons. My parents listened to Alla Pugachova, Vysotsky – everything, what incorporated USSR “culture” of that period. My father was even against ABBA, which was very popular at that time. I think, my father had a good ear for music, too (he even told me where I played off key, when I played guitar). But all in all he didn’t listen to music. Telling about rock music – it was difficult with it back in those years. The first rock music I heard then was the Russian band “Kruiz”. Then I bought the vinyls of the bands “Avtograf” and “Chorny Kofe” (and played them to rags). Just after them I listened to Led Zeppelin and Deep Purple. And began to look for something more heavy and faster. But having put through me lots of styles I returned to the ideas of hard rock and blues.

What instruments do you play and when did you start playing? Did you have a formal education in music? Can you read music?

I.L.: I began to play the acoustic guitar and it was quite late – I was 14-15 years old. It was an awful 7-strings Russian guitar; I took the 7th string off it. At the beginning I tried to learn by myself, wrote down the chords from my friends, but then I went to learn in a music college “Red Chemical”. I learned there about a year long and they gave me a good stimulus for further independent education. I dreamt about an electro guitar and saved money for a long time to buy it. It’s terrible to recall what I was playing at then J. The electro guitar became my main instrument, but I’ve always returned to the acoustic guitar. When I was 20 I took lessons of classic guitar, played classical etudes. Once a friend of mine left a mandolin and unexpectedly it became another instrument I began to play, which I love till now. I have no full musical education and it’s difficult for me to read music. I rely more upon my memory, ears and experience. 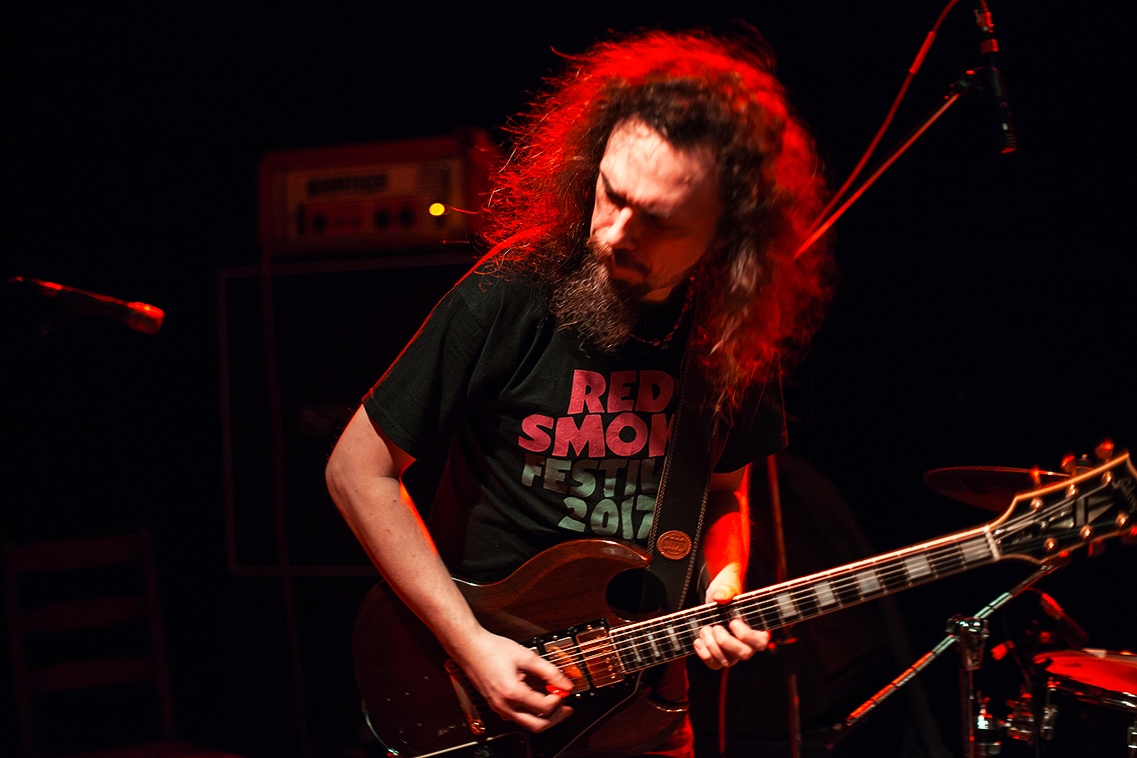 What was your first band?

I.L.: It was a school band, which we could never find a name for. We tried to play Deep Purple, Led Zeppelin, some blues improvisations. Then we composed more heavy and modern songs, but the band took apart due to creative differences. Then I played in many different groups from metal/hard core till neo-folk… But at some point I understood that I had to begin with my own projects. My first own project was Rushus. It was a strange symbiosis of electro guitar and percussion. Later on a bass guitar was added and we began to play something like ethno-jazz.

What challenges do you feel you face being in Moscow compared to Europe?

I.L.: A lower level of sound-engineering. Not so many people are coming to the gigs. And the attitude of clubs and promoters to musicians in general. I think the situation in Europe is much better.

Is it hard to play live in Russia? The distances between cities is huge.

I.L.: I don’t give lots of concerts in Russian cities actually. They usually take place in Moscow and Saint Petersburg. Of course I’ve been with the gigs in other cities, but now there is an economic recession and there is no sense in Russian tours, as pity as it is.

You play in three bands. Is one band, your main band or do you lead all three bands- The Re-Stoned, Maat Lander, A Foggy Realm.

I.L.: My main band is The Re-Stoned now. The last few years I also take part in an interesting project with my friends from the band Vespero – Maat Lander. A Foggy Realm is my solo drone-ambient project, which performs very rarely live.

The Re-Stoned, how did this band form? Has the band always been an instrumental band? I have not heard the earliest releases, how would you describe the bands evolution?

I.L.: I created The Re-Stoned in summer 2008. The band was instrumental from the beginning. However, we have some covers with vocals and our own song as well. My wife Veronika sang there. Our new album “Chronoclasm” is a big step forward in my opinion, however it was created with big difficulties. In spite of the fact that I like thought-out and checked albums, the band has another side – the jams. So we composed ad recorded lots of songs. I try to combine thought-out compositions with jams. I think this is what The Re-Stoned is. We are not a jam band, but we are also not a boring heavy band, which plays everything always in the same way.

Maat Lander, is a newer band, project and that has only release a few albums now. This one is more like space rock or a spacey version of The Re-Stoned?

I.L.: I didn’t want to create a cosmic version of The Re-Stoned. Maat Lander appeared as a dialog with Ark Fedotov from Vespero. He suggested me to record some acoustics to some of his compositions with synthesizers. Then we began to make mutual compositions and understood that it became serious. Arkady invited his brother on drums. With these members Maat Lander exists to present day. It is a very interesting project, a possibility to make something beyond the frames of my main band. There are absolutely different limits, forms, lots of electronics. The first album was fully created on the basis of synthesizers. It’s funny but I used in Maat Lander some heritage of my old project Rushus. It’s great, when the old tracks being recorded many years ago find new life.

How often to each of these bands rehearse? You must play music almost everyday with some band?

I.L.: Usually I rehearse only with The Re-Stoned. Due to living in different cities we can’t constantly rehearse with Maat Lander. We rehearse with the guys shortly before the gigs.

How much of the music you make with the three groups is improvised? How important is improvisation to you? When you do play live do you often extend the numbers or are they played mostly like the record and maybe your solo parts are slightly different?

I.L.: There are elements of improvisations both in The Re-Stoned and in Maat Lander. It depends on specific compositions: in some of them I play identical solos, in others I improvise. It’s too boring to play everything identically.

What is your next music project?

I.L.: It’s difficult to say. I’m not ready for new projects, to be honest. I’d like to continue creating music and performing with The Re-Stoned and Maat Lander. They embrace all my musical interests (well, almost all of them) per se. But never say never.