Hailing from the Russian Federation comes an amazing band that has been around for quite a time. The band in question is The Re-Stoned and recently they have put out a single “Red” (cover of King Crimson). We wanted to talk with them about this new single and their previous album “Ram's Head”

which was their 2018 release. Also we wanted to know about the inner workings of such an amazing and established bands for stoner/desert rock today. They've been on a lot of Stoner/Desert Rock compilations as well as an extensive body of work. We are truly honored to interview The Re-Stoned.

Playing To The Cosmos With The Re-Stoned

1.CAM: Thank you so much for joining, which is truly an honour for us. So, to begin with, how did the inception of The Re-Stoned happen?

Hello! Ilya Lipkin here. It happened 10 years ago when I simply decided to start playing the music that I'd always loved: music from my childhood. So it turned out as a project now called The Re-Stoned. Through these years there were many changes in the rhythm section, lots of experiments with sound took place. I can say that we now sound exactly how I always wanted.

2.CAM: With your current single “Red,” a cover of a King Crimson song what prompted you to choose this song to cover and release as your newest single?

This single is a notable milestone of our band's timeline. For a very long time we wanted to make our version of this wonderful composition. It really means a lot to our band member, Vladimir, because many years ago it was King Crimson's music what inspired him to start playing bass guitar. As for me, I'd become a huge fan of King Crimson exactly after listening to 'Red' album, and still – 'Red' and 'Starless' are my favourite compositions.

3.CAM: Where was “Red” recorded, and does is has a taste of a new release?

We produced 'Red' in a small studio in Moscow called Echo Records. The song was played and recorded live, after that, I overdubbed guitar tracks. The whole process of playing the song in studio was filmed on video. This time we went the old-school way with no excessive editing, click tracks, drum samples and so on. By the way, this was the first time we were using a Ludwig drum set – and it's a great honour for us to become a part of Ludwig family. Thus, we are not going to include 'Red' in our forthcoming album, maybe we'll have a chance to release it on a 7" vynil and right now we are looking for this opportunity. 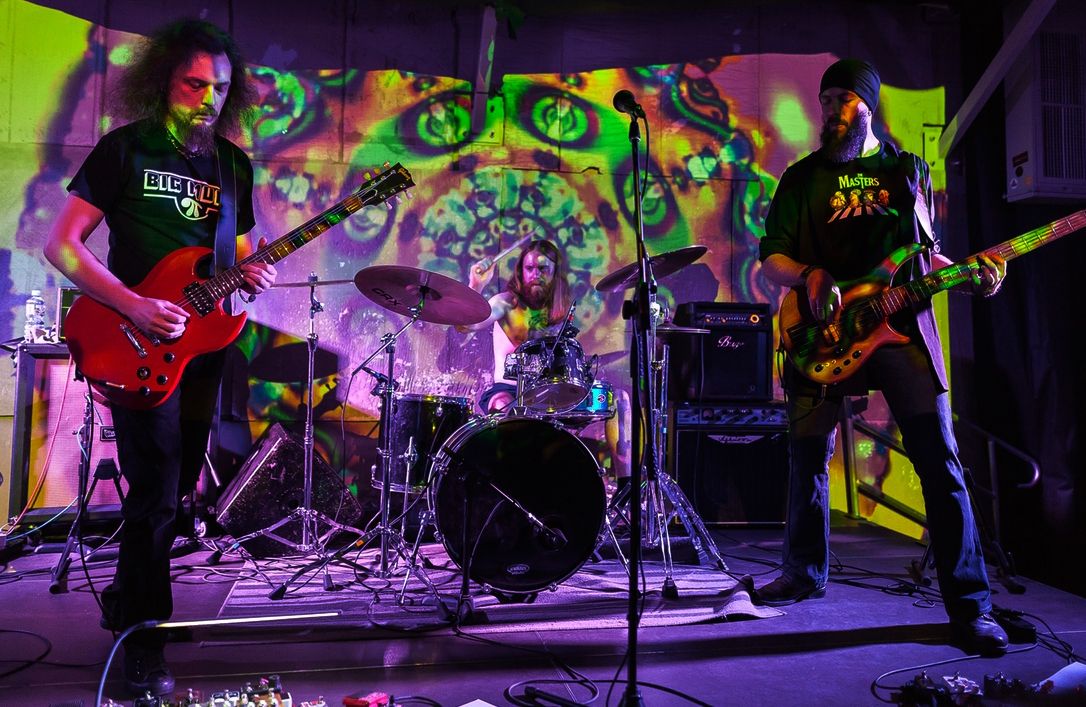 4.CAM: With your release of Ram's Head, what influences musically did you draw from?

There were no new musical influences on me while working on the music for Ram's Head. I still stick to my old music taste – Black Sabbath, Led Zeppelin, Hendrix, Pink Floyd.

The 'Red' artwork was created by me, as well as the idea for 'Ram's Head' album cover art, which was later implemented by Arzamas Zhelonkin, a brilliant artist, who often works with us.

6.CAM: Was the creation of “Ram's Head” a challenge or easy undertaking?

Well, initially we planned to release two splits on vinyl, but it didn't happen after all. So we put all the compositions that were supposed to be on those records into a full-length album. We performed and recorded them live, accompanied by a guest musician – Maximilian Maxotsky, who joined in on drums. After that, I recorded additional guitars at home and mixed the tracks. A lot of compositions from 'Ram's Head' were performed before the album was released - during our European tour in 2017.

7.CAM: Any of your earlier releases a challenge in creating?

I've never experienced any lack of ideas for my music, but the implementation of them may become a real challenge. Actually, creating every album was a challenge at some point. “Stories of the astral Lizard” was one of the most difficult albums for me to produce. It was recorded within two days, but it took me two years to produce it. It was totally worth it, thus, sometimes it's not a good idea to work on an album for such a long time.

8.CAM: Do you have any personal beliefs that come across in your music?

All my music is very personal. It feels like the creation of an alternative reality, where I feel well, and I want to share it with my listeners. Our music contains a lot of emotive messages, and I know for sure that they are always received, which makes me really happy.

9.CAM: What does your stage show consist of?

We consider our show as a simple thing: just a trio with no frontman playing instrumental music backed up with a deep psychedelic video art. It's that simple, but it works great for us to provide a really emotional music journey for a listener when we are able to travel from sadness and rage to joy and love and so on. I'm glad that usually, people are never disappointed after visiting our shows.

10.CAM: Have you ever played in the United States? If so how is it different than say an European audience?

Unfortunately, we have never played in the United States, but we dream to do it for a very long time already because we know for sure: there are a lot of our fans out there who want to hear us playing live. We are searching for US-tour opportunities and really hope to acquire anything by the next year, so we are always open to any proposals from booking managers and promoters.

11.CAM: What are the differences playing live as opposed to making music in the studio setting?

We are trying to sound in a studio exactly how we sound while playing live on stage and vice versa. Of course, while working in a studio I've got much more opportunities for experiments on my sound, though I always keep in mind the thoughts about re-creating them live, which is really hard sometimes.

12.CAM: In your opinion how do you feel about commercialism when pertaining to the music industry? Does it hinder or help the musician or bands in question?

Oh, that's really complicated. It's great when commercial questions of the business do not distract you from the main process of production and do not influence your music deeply. But it's out there and it's completely natural while working with a major label, though even the underground music world nowadays is heavily commercialized, especially in the area of booking for big festivals.

15.CAM: Are you classically trained musicians or self-taught?

I am a self-taught musician, so is our bass-guitarist, Vladimir. Anton, our drummer, is the only professional musician in our band.

16.CAM: Are there any other projects you happen to be in involved in or is The Re-Stoned your main focus?

Yes, we all do have side projects. Besides the Re-stoned, I play in a space rock band, Maat Lander. Vladimir is involved in a band called Elefant' Hands. Anton also participates in a lot of various bands. As for me, I consider The Re-Stoned as my main project.

17.CAM: How is it possible for our readers to purchase your music?

They can do it at our European shows. We also have a merch page on Bandcamp, and our records are sold by various distributors. All digital versions of our albums are available on iTunes, Amazon, Spotify etc.

18. CAM: What overall influences do you draw from both musically and non musically to create The Re-Stoned sound?

We are mainly influenced by the musical heritage of the '60s and '70s and modern technical achievements in audio technologies. We use Ludwig drumset and I play on old Gibson guitars using vintage amplifiers. I've spent a lot of time searching for really great guitar pedals, and it would cost me a fortune to test every fuzz pedal I'm eager to give a try. For the last six months, I've been collaborating with a legendary guitar pedal constructor from Screddy Pedals – Marc Alphs. He produces outstanding pedals exclusively for me, and it's real pleasure to use them.

We are sincerely happy if what we do has a listener's response. That is truly a wonderful thing. We really appreciate all the kind words and hope to meet everyone at our European concerts in May.

Thanks to The Re-Stoned for talking to us about the new single “Red” and their previous release “Ram's Head.” The Re-Stoned are simply incredible musicians, they literary are able to take you to a magic journey with their music. No lyrics are needed and this band proves it taking the Stoner/Desert Rock sound to a whole new level. If you never heard of this amazing band I suggest you check them out and buy their material you won't regret it. The Re-Stoned's instrumentation and the direction it takes you throughout the songs are beautiful tapestries of sound. Each member compliments the others brilliantly. Culture Asylum Magazine fully supports The Re-Stoned and all their future endeavors.

Special thanks for the translaton to Igor Obruchnikov.